The worst working conditions for Sachsenhausen’s inmates outside the main camp could have been at the Klinkerwerk – which was known as ‘the murderous fabric’. Only 2.5 kilometre away from Sachsenhausen’s gates, a labour complex was developed for its inmates. The main occupation of the Klinkerwerk was a brick-work factory. Curt Lugenheim was its architect, he planned on a concrete factory of 40.000sq.m. consisting twenty-four tunnel furnaces. The bricks had to be produced to realise the megalomanic Nazi building projects in Berlin, a prestigious initiative by Hitler and Albert Speer. How did the working and living conditions develop in the Klinkerwerk? Till which degree was this torture intended by the SS? And how is this place of forced labour and death remembered?

The roll call at Sachsenhausen started at 5pm. Since March 1938, the unlucky unit for the Klinkerwerk was formed and had to form a line. The unit marched in rows of five. Every inmate wanted to walk in the middle and even argued about this position. Standing in the middle had the benefit that one could take a piss while walking with the least chance of being seen by the SS guards. These weaponed guards had gaps of ten meter between them – on each side. Every inmate had the runs, and especially while marching – one could not prevent it from happening. Stepping out to sit aside in the bushes had the risk that an SS guard would shoot you in ‘your attempt to escape’, which was usually the excuse used by the SS when they felt like shooting someone. The march towards the Klinkerwerk was 2.5 kilometre and the inmates had to sing humiliating songs on their way. By the end of the shift, the prisoners brought the dead bodies of their fellow inmates on their way back to Sachsenhausen.

Initially, a shooting range for the SS was developed in March 1938. A barrack was build for the SS, as well as earthworks to stop bullets when it missed the target. The workers here were a Strafkommando (penal unit) of Sachsenhausen, consisting of many jews, homosexuals and jehova’s witnesses. Sometimes, the SS drifted an inmate to cross the border’s line – to shoot him in its ‘attempt to escape’. SS men generally liked to use prisoners as a target, resulting daily in death and wounded inmates. In 1939/40, the forced labourers had to dig out the bottom of a two docking sites. They dug eleven meter in the ground while drowning or being beaten till death. Here, most of the fallen were jews, homosexuals and Polish men. When this murderous harbour was build, the work which had to be done here was still dangerous. The inmates had to load and unload the boats with heavy bags of stones, and lost their balance on the landing-stages which bent through. One of these men who lost their balance while unloading a boat was the Polish inmate Edmund Braminski. He was saved from the cold water and brought to the doctors barrack at Sachsenhausen. Braminski had luck after all – someone who knew him told the Nazi’s that he had a technical education. When he left the doctors’ barrack, Braminski worked under relative better working conditions and survived the war. Other men who fell in the water drowned, froze to death or were beaten by the SS for losing their materials. Next to the Klinkerwerk, it came to the building of a SS owned bakery in 1939 and 1941. Here, 80 prisoners were forced to bake 10.000 loaves of bread daily – a number which increased to 43.000 by the end of 1944.

In 1940, another two sites were built around the brick works. One was a laboratory to test the ceramics. Here, more lucky inmates had the opportunity to work under psychically favourable conditions. Most likely, the labourers here were from western Europe. In later years, experiments were done here with ceramic explosives to make more dangerous shells. Secondly, a natural stone processing plant was also realised next to the harbour. This processing plant was intiated by Albert Speer and the unit which worked here was named the Kommando Speer (Speer Unit). For this plant, train tracks were developed up till the factory, which implicates that the harbour was occupied already. When the plans to rebuild Berlin were postponed by 1942, the natural stone process plant changed into a centre were confiscated items from occupied countries were sorted out and loaded on ships again. In this part of industry, 2000 till 2500 inmates were forced to work. Daily, around the ten people did not make it till the end due to torture and starvation. In 1944, the natural stone processing works was also used in the production of Heinkel combat airplanes.

By April 1941, ten barracks were developed next to the Klinkerwerk. Barrack 1 was for the labourers in the new Brotfabrik. Barrack 2 and 3 were probably for Polish inmates, barrack 4 for jews. The political opponents were situated in barrack 6. Barrack 9 and 10 were reserved for ‘criminals’ – although the SS guards were not meant with that. They had two offices at the gate of the camp. The other barracks (5, 7 and 8) were mixed with forced labourers from occupied countries, who initially went into hiding but unfortunately were found. With these barracks, the Klinkerwerk became an Außenlager (outside camp) from Sachsenhausen. The daily marches from Sachsenhausen to the Klinkerwerk came to an end. As an Außenlager, the Klinkerwerk also had an own Appellplatz (roll call square) and its own services concerning food, laundry, a barrack for the ill inmates – as well as its own gibbets. In the winter of 1941/42, fourty men who were too weak for work were killed by the SS. Mostly, they were forced to do sports – such as jumping like a frog – before water was poured over them and they would freeze to death. In 1942, a wave of homosexuals were sent from Sachsenhausen to the Klinkerwerk. From July till September that year, around the 200 homosexual inmates were killed. Some of them were beaten up in a fatal way, died in mounted accidents or were executed ‘on their attempt to escape’. After the war, no Nazi has been trialed for these crimes specifically. 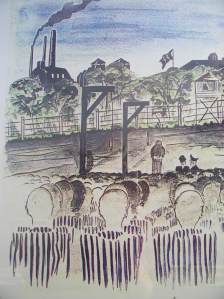 In 1942, a Strafkommando was developed with a seperate barrack for them. The windows of this barracks were painted white, so inside tortures would be more secretive. After Walter Hilger organised ‘schnapps’ in his concentration camp Lichterfelde, an Außenlager of Sachsenhausen, he was sentenced to work in this Strafkommando for about seven weeks. Constantly, some of this 40-men unit died – and they had to be replenished all the time. The Strafkommando had to load sand on a truck and fill a pit on the site with this. Men in this unit were beaten all the time and for the smallest mistake – one was not given his daily meal.

At the end of 1943, the arnaments industry was introduced at the Klinkerwerk. At the eastside of the brick-factory, a grenade foundry was build. Day and night, shells were produced – up till 10.000 a day. For this, 30.000 kilograms of metal was used. With the three of them, prisoners had to bring special ‘bags’ with boiling metal to make the shells. These ‘bags’ weight 50 kilograms when they were filled. Pouring the boiling metal in the ‘bags’ or spilling a drop created a small firework of steel splinters. Except from their thin cothes, prisoners were not protected from any of these and suffered often from burning splinters. In an attempt to exterminate them, Hungarian jews were forced to do this work during the autumn of 1944. Because of the forced work in the arnament industry, the number of Klinkerwerk’s inmates rose to 3600 by the end of 1944. Therefore, two-story stone barracks had to be build.

By January 1945, the SS dumped around the 8000 kilograms of ashes in the harbour. The Klinkerwerk became the target of a heavy Allied air raid on April the 10th, in which at least 200 prisoners lost their lifes. The victims were cremated afterwards, or burried in bomb craters. Other victims drowned in the nearby swamp in their attempt to escape the bombs and the camp. After the air raid, the Klinkerwerk was fully destroyed had to close. All inmates were forced to go back to Sachsenhausen again.

The first memorial to the Klinkerwerk is erected in April 1977. This brick wall is located on the road towards the Klinkerwerk because the former industrial yard was used by the GDR as a military training ground since 1966. After the Fall, the site became an industrial yard for concrete in 1990 – despite various protests. The site has a protected status since 1996, when also the project started in which the site will develop as a History Park. From 2000 onwards, this site is being build – and it is still under construction. One can already visit parts of the site now. Many information panels inform the visitor since December 2011. Unfortunately, the site of the former production fabric is still not visitable – probably because the bodies of air raid victims can be found here. At the harbour, an improvised memorial of a brick triangle is made in August 2007. It remembers the executions of the homosexuals in the summer of 1942.

By the end of the day, working at the Klinkerwerk already was a punishment for the ones who were sentenced to a concentration camp. The SS’ers seemed to form the Klinkerwerk’s units by groups which they hated the most. Marching towards there was already a humiliation. The work was too heavy for all of the inmates and it was known that one could not do this work for a long time. The only exception within the Klinkerwerk complex might have been the laboratory, of which little is known (or shown). Within the Klinkerwerk, there was even another punishment unit – which increased the chance of an inmate to be murdered. That being forced to work in the Klinkerwerk was close to being murdered is illustrated by the execution of 200 homosexuals in the summer of 1942. So to speak, death was all around at the Klinkerwerk – if not by working, it was by torturing and exectutions. In the meanwhile, the complex of the Klinkerwerk expanded. Not only bricks were baked, also shells were produced since 1943. Bricks and shells had in common that they needed a harbour for the materials and ovens for the production. Secondly, the production of bricks and shells were both physically heavy. Most of the work which had to be done at the Klinkerwerk were digging ground, (un)loading ships, working with ovens, draining swamps and building barracks. During the years, the site seemed to be always under construction. The number of inmates increased together with the site’s complex. The barracks, who were build in 1941 for 1500 men, were used by 3000 men before more barracks were developed. After WWII, a memorial for the Klinkerwerk only came after three decades. Sachsenhausen became a memorial site in 1961 – while five years later, the site of the Klinkerwerk became a military training ground for GDR’s army in its total. For that reason, the first memorial was even located at a public place at a traffic road nearby – but not at the original ground. After the Fall, the harbour – in which over 8000 kilogram of ashes is dumped – wasn’t given any memorial but again used for an industrial enterprise in the concrete business. After protests, the former camp finally had a memorial status in 1996 – definetly saving the remaining SS barrack from 1936 and the former Brotfabrik which are not visitable either. Now, the development of a History Park takes over 15 years already. Nevertheless, the site is already an interesting place to visit since the information panels were revealed in December 2011. In my opinion, the History Park is a promising project which clarifies the layered complexity of a concentration camp with the Außenkommando’s and Außenlager. 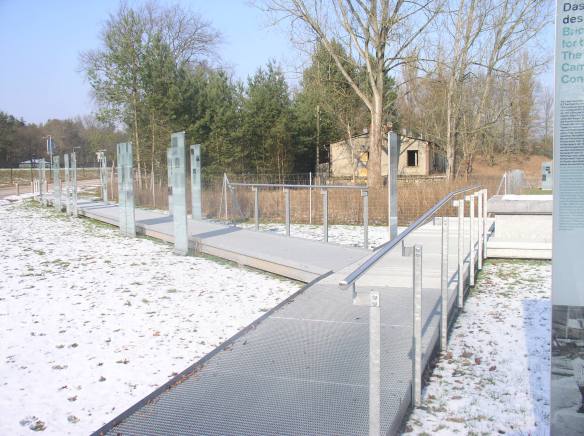