In an earlier update, I wrote about the monument for the round-ups of the jewish population at Berlin’s Koppenplatz – a crucial step within the Holocaust. This article is about the next step in the darkest page of history, the deportations that followed.

When Hitler took power in January 1933, 160.000 jews lived in the German capital. In the following years, nearly 100.000 of them fled to countries as the USA and England, or even to Shanghai. Although this emigration had never been voluntarily, it was even impossible to emigrate from Nazi-Germany when the War started in September 1939. In August 1941, about 66.000 jews were trapped in Berlin. Now, more than elsewhere – the population of Berlin suffered more Joseph Goebbels, the infamous Minister of Propaganda. In the German capital, he was also an ambitious Gauleiter (District leader). The virulent antisemite wanted Berlin to be ‘Judenfrei’ (Nazi-German for ‘Free from jews’) – and he even bothered Hitler with this. On August 19th 1941, Hitler promised the fanatic Gauleiter to ‘transport’ the jews out of ‘his’ city when the possibility was there. Only one month later – Goebbels confirmed that this day came closer. In an diary entry of September 24th, he wrote that Hitler stated Berlin would be the very first city to be ‘Judenfrei’ indeed. The deportations were in sight. Another month later, at October 24th, Goebbels wrote

“Gradually, we start with the evacuation of the Berlin jews to the East. A couple of thousands are already on their way. In first instance, they go to Litzmannstadt (Nazi-German for: Łódź). This causes commotion in the affected circles. The jews ask for support in anonymous letters to foreign correspondents. (…) It is annoying that this topic is getting attention in the world’s media, but we have to deal with it. The main thing is that the Reichshauptstadt (Berlin) is made Judenfrei. I will not rest before this goal is totally realised.”

Deportation of Jews from Hanau to the Theresienstadt ghetto. (Hanau, Germany, May 30, 1942. ©US Holocaust Memorial Museum)

From three stations in the city, about 50.000 jews from Berlin were deported. The first deportation took place at October 18th, when over a thousand jews were transported from Berlin’s S-Bahnhof Grunewald to the ghetto in Łódź. Men that lost their job during the discriminative laws, women and children were among the first to be deported. Already in this early stage, deportations were connected with the Holocaust. By November 1941 till January 1942, 4000 jews were sent to the ghetto of Riga – where Nazi authorities knew that ‘Einsatzgruppen‘ (‘Special Forces’) executed these jews.

From January 1942 onwards, jews were deported from another location – the Güterbahnhof Moabit (‘Cargo station in Moabit’) fairly close to the city centre. Here, a platform was used that was seperated and parallel of the S-Bahn tracks. In June 1942, a new stage in the deportation had started. By then, elderly jews were deported from the Anhalter Bahnhof in the middle of Berlin. In these ‘Altertransporte‘ (‘Elderly transports’), about 9600 people were deported in 116 times. In these Altertransporte were one or two railway carriages (maximum of 50 people in one carriage) placed behind the public train towards Prague, that left at 06:07am. Now, the jews didn’t end up in the City of a Hundred Spires – but in concentration camp (annex ghetto) Theresienstadt.

The deportations themself were already horrible. Trains from the Wehrmacht (German Army) had precedence, so by 1944 – the average speed of a deportation train was only 25 km/hour. Railway carriages were overcrowded, while there were no toilet facilities. In combination with a lack of air, the stench must have been horrible. Throughout the tens of hours, people slowly died for breathing problems or even dehydration. The train was guarded by the SiPo (Security Police) and the Ordnungspolizei (Order Police). Them who decided to take the risk and escape the train, would face a harsh life into the wild – where they were still hunted by German battalions.Still, if the transport wasn’t the hell on earth, their destination was. The ghettos and camps in which the jews were concentrated were overcrowded and fatal diseases came up. From the ghetto in Łódź, jews were deported to the variety of extermination factories. The first one was already taken into use by December 1941. From Theresienstadt, the jews were mostly deported to the concentration and extermination camp of Auschwitz – which has been in use by March 1942. All summed up, for a jew – there was only a very small chance of surviving after being deported.At the start of 1943, most of the jews were already deported and murdered. Still, there were about 8000 jewish men in Berlin that worked as a forced labour for factories of War’s importance. Due to the use of forced labours from occupied territories, the Nazi’s considered to be the working jews as redundant as well. In the morning of February 27th, these 8000 jews were rounded up in the ‘Fabrikaktion’. Only the 2000 jews that were married to Germans -and who resisted the Nazi-pressure of divorcing- were saved from deportation – and only after a courageous protest. With only a fraction left of the 166.000 people that once lived here, Berlin was officially declared ‘Judenfrei‘ on the 19th of May 1943. However, deportations of smaller numbers of jews took place up till January 1945, when the Nazi’s knew that the War was lost – and the killing of jews was even more useless than ever been before. I’ve read that 7000 jews lived in Berlin when the War ended in May 1945. I estimate that around 4000 of them were married with a German. Another estimated 1500 survived by living in hiding. The other 1500 survivors remains a mystery – but I think, these survived due to the usage of counterfeited passports. 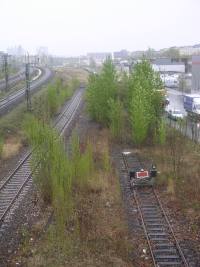 So far the mass deportations of the jews, earlier described as the second step in the Holocaust. My question now is how these deportations have been remembered? And, somehow, who would guess that it took over four decades for people to realise how several Berlin stations have been locations that participated in the Holocaust? Now, three locations in the city remember the deportations of the jewish population. Since 1987, a monument is revealed at the Putlitzbrücke, close to the S-Bahnhof Westhafen. It remembers the more than 32.000 people that were deported from this since the beginning of 1942. They’ve set their last feet on Berlin soil at the platform of this Güterbahnhof (‘Cargo station’). An information panel is located at the Anhalter Bahnhof. Here, the so-called ‘Altertransporte‘ are remembered, in which 9600 jews were deported. 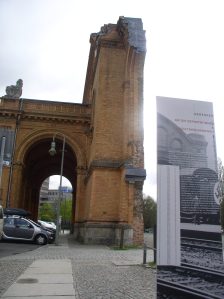 At the S-Bahnhof Grunewald, thousands of jews were deported from October 1941 on. Here, various intiatiors have constructed monuments. Already in 1953, a communist group published a plaque at the railway station’s signal house. Typical for the 1950s, when West Germany was barely denazified and fanatic anti-communist, this one was removed by the police at some point. In 1973, another memorial tablet was revealed. At least, this one lasted thirteen years – when it was stolen after all. Since April 1987, a new memorial stone states in Hebrew and German. In addition, the local evangelics made a plaque in October that same year. In the early 1990s, the district of Wilmersdorf asked the Polish artist Karol Broniatowski to make a memorial. Broniatowski designed a concrete wall, with hollow human figures in this. As the succesor of the Deutsche Reichsbahn (German Imperial Railway), the Deutsche Bahn added the fourth memorial at S-Bahnhof Grunewald. After a competition, there was chosen for a design in which the details of all the 186 transportations (so, directions and numbers of deported jews) that are written in steel plates. These plates are integrated at the ‘Gleis 17‘ (‘Railway Track 17’) where most of the deportation trains left. For this, the platform had to be restored – while the railway tracks were kept grown over by vegetation. The latter symbolises that there won’t ever be a train leaving from this platform with its horrific history…

Taking everything into account, this has been an article about the decimation of the jewish population in Berlin. In contrast to what the Nazi’s stated, their capital has never been really ‘Judenfrei‘. Joseph Goebbels, who repeatedly stated that he wouldn’t rest before the last jew had left Berlin, did not survive the War – but 7000 jewish men did. Nevertheless, this is incomparible to the 166.000 jews that once lived in Berlin. And for the 50.000 Berlin jews that were deported -and murdered-. Memorials only came up from the later 1980s. But why? Is a question that still remains. Perhaps because the deportations only have been a part of the Holocaust? Because the intended extermination took place in camps, not in carriages? …I don’t even think so. In the next article, I’ll write about the Holocaust and Berlin’s memorials – which only came in the 1990s…