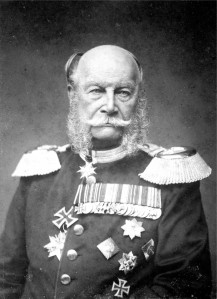 Perhaps, Germany had a tradition of failing attempts to kill its rulers. During the Third Reich, Hitler survived countless attempts to be liquidated – among them are the most famous attempts by Georg Elser and the circle around Von Stauffenberg. The retaliations by the nazi’s which followed were unfortunately unequal and always in their opponents disadvantage. In the Second Reich – Kaiser Wilhelm I already survived the four attempts to be assassinated before he died of a natural cause in 1888. Two of these attempts took place in 1878 at the Unter den Linden – where the Kaiser was seen daily, making his tours through the Tiergarten.

It was the 11th May of 1878 at 3:30pm, in front of the hotel of the Russian embassy – situated at Unter den Linden. Here and then, Max Hödel waited for the Kaiser Wilhelm I to be driven back from the Tiergarten in an open carriage. Hödel aimed his loaded Lefaucheux on the emperor and his daughter from a 3 meter distance – but missed his target when he fired and fled by running. From another ten meter, Hödel missed his target for the second time. Ten or twelve people followed Hödel – on which he shot and missed another three times. Hödel was caught and arrested after 250 meter at the Mittelstraße 34 – after which he was brought to the police station at the Molkenmarkt and imprisoned in a prison at the Hausvogteiplatz. He was executioned in the Zellengefängnis Lehrter Straße.

What is there to say about this figure and his attempt? Max Hödel was was born the 27th of May 1857 in Leipzig. He was born as Hödel – his mother’s surname, but called himself also Lehmann or Traber. I am not sure whether he knew his father, but his social background seems to be one of a poor man’s. When he was ten, the young Max was once caught for thievery. Hödel became a tinsmith, a job where he had been gone to school for. Max Hödel was born evangelic – but became a member of the Sozialistische Arbeiterspartei (SAP). He was quite an active member, giving speeches throughout Germany and selling social democratic papers. He had the age of twenty when he attempted to shoot Wilhelm I and had his 21st birthday before his execution. Hödel kept a variety of social democratic papers with him during his attempt to kill Wilhelm I.

Regardless of his membership, it is hard to say whether Hödel was a social democrat or an anarchist. Hödel’s deed fits within the many anarchist attempts to kill rulers by the end of the 19th century – and his deed was rejected by the SAP. Perhaps, the question about his exact political conviction is redundant – since he wasn’t much of a precise thinker but rather a political active, angry young man. Throughout his imprisonment, Hödel couldn’t stop saying he was a radical opponent of the system.

Max Hödel denied his attempt and told the court that he wanted to shoot himself – which was highly unconvincing. Eight eyewitnesses – among them the Kaiser’s wagoner – contradicted Hödels story. When Hödel was blamed for shooting at citizens, he answered that he doesn’t have to make an apologise since he didn’t hit someone. Afterwards – C. Söhnel, one of Hödel’s wardens, made fun of his talent to miss a target.

The court took place the 17th of June and convicted Hödel for high treason and sentenced him to death, Max said “Bravo!”. During the court and while he was imprisoned, Hödel seemed to enjoy the publicity he was given in newspapers. In his farewell-letter to his parents, Max said he wrote in ‘Saxon’ cosiness and gave the advice to enjoy life on earth, since there won’t be a heaven – nor a place where they would meet each other again.

The execution would have taken place at 6am of the 16th of August – if Hödel didn’t request for mercy. The request was ignored and the execution took place at 7pm. Hödel’s executioner was Julius Krautz (1843-1921) – who started his career as an executioner only two days before. Krautz became the most infamous executioner of Prussia – who took the lives of 53 men and a woman during his career till 1889. The used axe made as well his debut and final at the same time. It is still visible at the Märkisches Museum in Berlin.

The effect of Hödel’s attempt was counterproductive. As soon as he took knowlegde of the attempt of the assassination – Reichskanzler Otto Furst von Bismarck developed the Sozialistengesetz – an anti-social-democratic law in which social democratic organisations, newspapers, books, labour unions or other socialist activities were made illegal. The law as already made at the 15th of May – the voting was the 24th. The law wasn’t accepted by then – only 57 deputees agreed with the law and 251 voted against it. August Bebel and Wilhelm Liebknecht, both prominents of the SAP, didn’t support the attempt at all – and thought of Hödel an insane loner. Two days later, a mass demonstration against the Sozialistengesetz took place at the Moritzplatz. Though Hödel didn’t find political support among his party official’s – neither the parliament nor the public opinion supported the Reichskanzler in his attempt to ban the social democratic movement.

The lack of support for the Sozialistengesetz changed a week later – on the 2nd of June – when another attempt was made to assassinate Wilhelm I. From his second floor on Unter den Linden no. 18, Karl Eduard Nobiling (born 1848) shot Kaiser Wilhelm I with a dubbel barred gun when he drove by. The Kaiser survived, but was heavily wounded since he was hit by 30 short-catridges in his head, arms and back.

What kind of a man was Karl Nobiling? Not too much is known about the man – and it was and still is generally said that he was mentally ill. In contrast to Max Hödel, Nobiling had many chances in society. Nobiling was born in a family of landowners and his brothers were officers in the Prussian army. Besides, Nobiling was an educated man who wrote a dissertation for the university of Leipzig and wrote for scientific periodicals. It is said, that Nobiling thought of Hödel’s failure as naturally since he was only a young tinsmith.

Nobiling might have had contact with socialists – but he was no member of any anarchist of socialist organisation, and in any case – he was rather living, thinking and operating individually. After his attempt to murder, Nobiling shot himself and died September 10 by its consequence. Nobiling didn’t leave any notition for his action, nor did he explain before he lost his consciousness. Nevertheless, Von Bismarck convinced the parliament that the Sozialistengesetz should be accepted – at October 22nd, 1878. For the next eleven years, the reprisal affected a whole movement of opponents.

1 thought on “Unter den Linden, the summer of ’78. Two failed attempts to assassinate Kaiser Wilhelm I.”