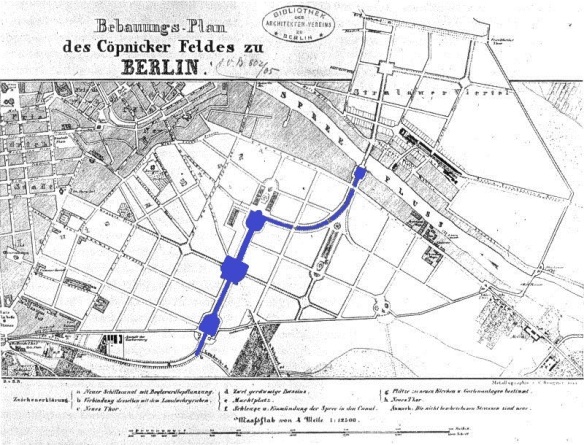 Walking through Kreuzberg surprises you all the time. When I got a little lost, I found my way in a park which used to be canal. The canal once was named after Luisenstadt, as the surrounding neighbourhood was called back in the day. This referred to a Prussian Queen: Luise of Mecklenburg-Strelitz (1776-1810). 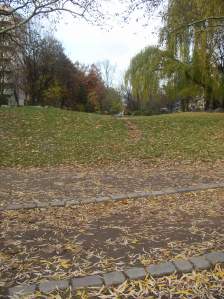 The Luisenstädtische Kanal was 2.2 kilometer long, dug out between 1848 and 1852. It connected Landwehrkanal with the river Spree. The Luisenstädtische Kanal was used both for canalizing the Spree’s floodings as well as material transportation. The canal started at the Landwehrkanal, which by the way only opened in 1846. From here, the Luisenstädtische Kanal went north inlands – passing the Wassertor after 200 meter. This was a control post where the ships were checked. A little later, an inland harbour was located at the Thor Becken (now: Wassertorplatz). Going further up, the canal passed the Oranienplatz – where trams from the Oranienstraße and the Dresdner Straße travelled over the canal. Next, the Engelbecken (“Angel’s pool”) came – an inland harbour with an outstanding view on St. Michaels-Kirche (build 1851-1861). From the Engelbecken, the canal bend northeastwards till it floaded into the Spree. 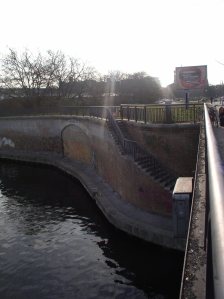 The plan for digging out the Luisenstädtische Kanal came up in 1844, when a group of engineers was asked to investigate the opportunities to realise such a thing. The plan was given a push by the revolutionary atmosphere in Europe after the Parisian revolt in Februar 1848. The building of the canal was, so to speak, a preventive remedy for the workless from revolting. While construction went on, a steam machine was used in October 1848. The 3000 workers feared being fired and replaced by more machines – so the social situation came to a riot after all. The steam machine was demolished before eleven strikers and one policeman were killed. In 1996, an information table  on the Adalbertbrücke remembers this.

From 1852 till 1926, the canal went through a relatively steady time. Markets were established at the Oranienplatz. Some bridges were build, such as the the Luisienbrücke (1880) – the Elisabethbrücke (1882), Melchiorbrücke (1886) and the Waldemarbrücke (1891). In the meanwhile, Luisenstadt – with Oranienplatz as its core – developed as the most densely populated neighbourhood within Berlins expanding city. The streets around the Kanal were occupied with Mietkasernen, while villa’s at the banks of the canal were build for the upper class. Warehouses were situated at the Oranienplatz.

When the First World War started, activity in de Luisenstädtische Kanal drastically dropped. In 1911, 2626 ships used the canal. In 1916, this number went back to… only three. Although the canal made a tiny revival after the war, average over the 100 ships yearly, the lack of water flowing couldn’t precause the canal from smelling bad. Algea was formed and the hygiene state of the canal became problematic.

In 1926, the Luisenstädtische Kanal was drained and filled with the upcoming ground of the metroline between Moritzplatz and the Neanderstraße (now: Heinrich-Heine-Straße). The drained canal developed as a park – by design of Erwin Barth (1880-1933). In despite of protests from the nearby church, a public swimming pool opened at the Engelbecken – right under the archangel’s eye. Furthermore, an Indian garden was developed – with sixteen fountains, palm trees, various exotic plants and elefant figures out of the landings. Due to a couple of mistakes, the construction of the park had already a delay. Next, the stock market crash from 1929 made the financing impossible. Berlin’s locals gave the drained canal the pet name “Der Park, der keinen werden will” (“The park which doesn’t want to become one.”) The transformation into a park was put on a definite hold in 1931. Especially the southern part of the canal, closer to the Landwehrkanal, wasn’t as it should have been in Barth’s plans.

Under national socialism, the park wasn’t finished. In stead, the nazi-regime renamed all canal banks after martyrs of their movement. In 1943, the sixteen fountains at the Engelbecken were melted and used for the war industry. The park’s supervisors were sent to the army. After the war, around 100.000 cubic meters of the city’s Trümmer (ruined buildings) was heaped here temporarily. In the process of the ‘denazification’ – the streets that were named after nazi martyrs were were given back their old names. The exception here is the the Engelufer, which was called Engeldamm since 1937 and Franz-Eckert-Straße since 1951 – before it back to turned to Engeldamm in 1991 again.

Since the city’s big-scale reorganisation of municipalities in 1920, the border between Mitte and Kreuzberg was situated at the northeastern part of the Luisenstädtische Kanal. This also meant that a part of the Luisenstädtische Kanal formed the border between East- and West Berlin – and Luisenstadt became a concept from the past. From the Waldemarbrücke up till the Schillingbrücke, the drained canal was East German territory.

In 1961, the Berlin Wall was build. The East German part of the park became the Todesstreife (death strip). After all, the Berlin Wall wasn’t just a single wall. There were two walls with a death strip in between. A refugee was arrested at the death strip, or shot before (s)he could jump over the last wall to West-Berlin. The Engelbecken was drained and became a 1300m² square between the walls – with a Wachtturm (watch tower). The next Wachtturm was already located at the Melchiorbrücke. A more light-hearted side effect of the Wall is the construction of the Baumhaus an der Mauer. On the western side of the wall, a small piece of land turned out still to be East German territory. In 1983, a certain Osman Kalin started to grow vegetables and build garden house here. Osman convinced the East German regime that his action wasn’t a protest. The police in West-Berlin couldn’t do much. This Baumhaus an der Mauer (tree house at the Berlin Wall) still exists!

South from the Waldemarbrücke, West Berlin was in charge of the park. Here, 3700 trees were planted between 1951 and 1955. The Wassertorplatz enjoyed popularity as a sportsfield, till a Verkehrskindergarten (traffic children playground) opened here in 1955. There were plans to build a highway on parts of the former canal, with an entire interchange at the Oranienplatz. Luckily, these plans changed in 1965. For the Internationale Bauausstellung (international building exhibition) of 1984, the West Berliner part of the drained canal turned into the park how Barth originally designed it. Many smaller developments followed – such as the Drachenbrunnen (“dragons fountains”) on the Oranienplatz in 1986. 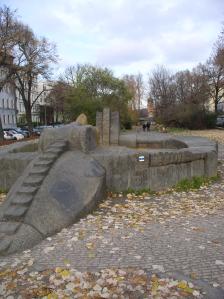 After the Wall fell in November 1989, Barth’s design from 1926 was found back under the Todesstreife. In 1991, the first lime trees and rose plants were planted on the former death strip. In 1993, the immergrüne Garten (“always green garden”) was opened between the Engelbecken and the Adalbertbrücke – followed by the Rosengarten between the Engelbecken and the Waldemarbrücke. At the Engelbecken, water came back. The former Indian garden, with its fountains and flowers, was reconstructed in 2006 (although the former palm trees never made it back!) The park between the Adalbertbrücke and Melchiorstraße was renovated in 2006 – the part between the Melchiorstraße and Köpenickerstraße followed two years later. Since 2007 it’s discussed how to renovate the park furthermore – up till the Waldemarbrücke. Walking through the drained Luisenstädtische Kanal is exciting given its 160 years of history – a history that’s still in progress! 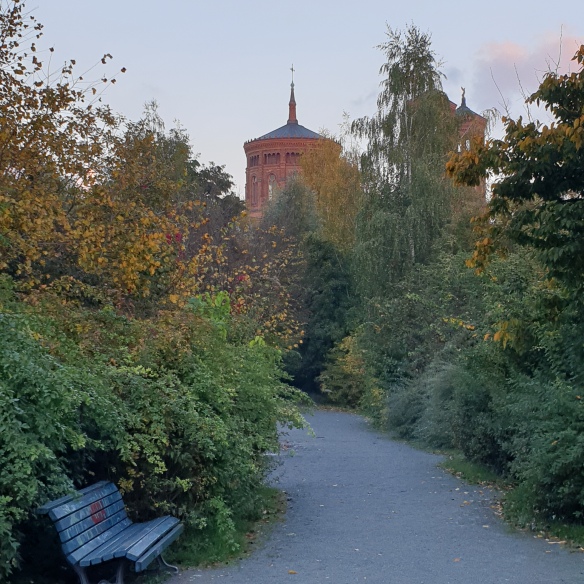 1 thought on “The Luisenstädtische Kanal. A nonexisting canal in a likewise district.”